Like a lot of kids, I grew up watching Mythbusters and thinking “that would be the coolest job ever”, and a goal of mine ever since has been to build a full sized remote control car. Last spring, I got an opportunity to do that for How to Learn Anything  and with the help of a very talented “local Mythbuster”, we were able to pull it off. It was the coolest thing I’ve ever been a part. This post is going to outline how we built it, and how its pretty much like building a small RC car, just way bigger. But before we get into that, check out the episode 4 of How to Learn Anything.

Part 1: How We Built a Full Sized RC Car

When I get down to the splits, I will share part 2, and my stretching routine with you guys, but until then, if you have a few thousand dollars laying around this is how to build a full sized remote control car.

The first step to building a full sized RC car, is to get a car you are willing to destroy. We found this baby on Kijiji (Canadian Craigslist) for $700. Not the best deal, but it had 4×4, we were in a bit of a time pinch and the guy selling it was really nice.

If you’ve never done this before, or do not have access to a ton of resources, it would be best to find a friend or mentor to help you out with this project. Our mentor was Larry, a local creator who works in the film industry making props and and ton of cool stuff for people’s film projects. He can build pretty much anything you ask him to, I like to think of him as Edmonton’s “Mythbuster”. Larry is the reason this came together, I helped out on the project, but let’s be honest, he was the reason we pulled this off. 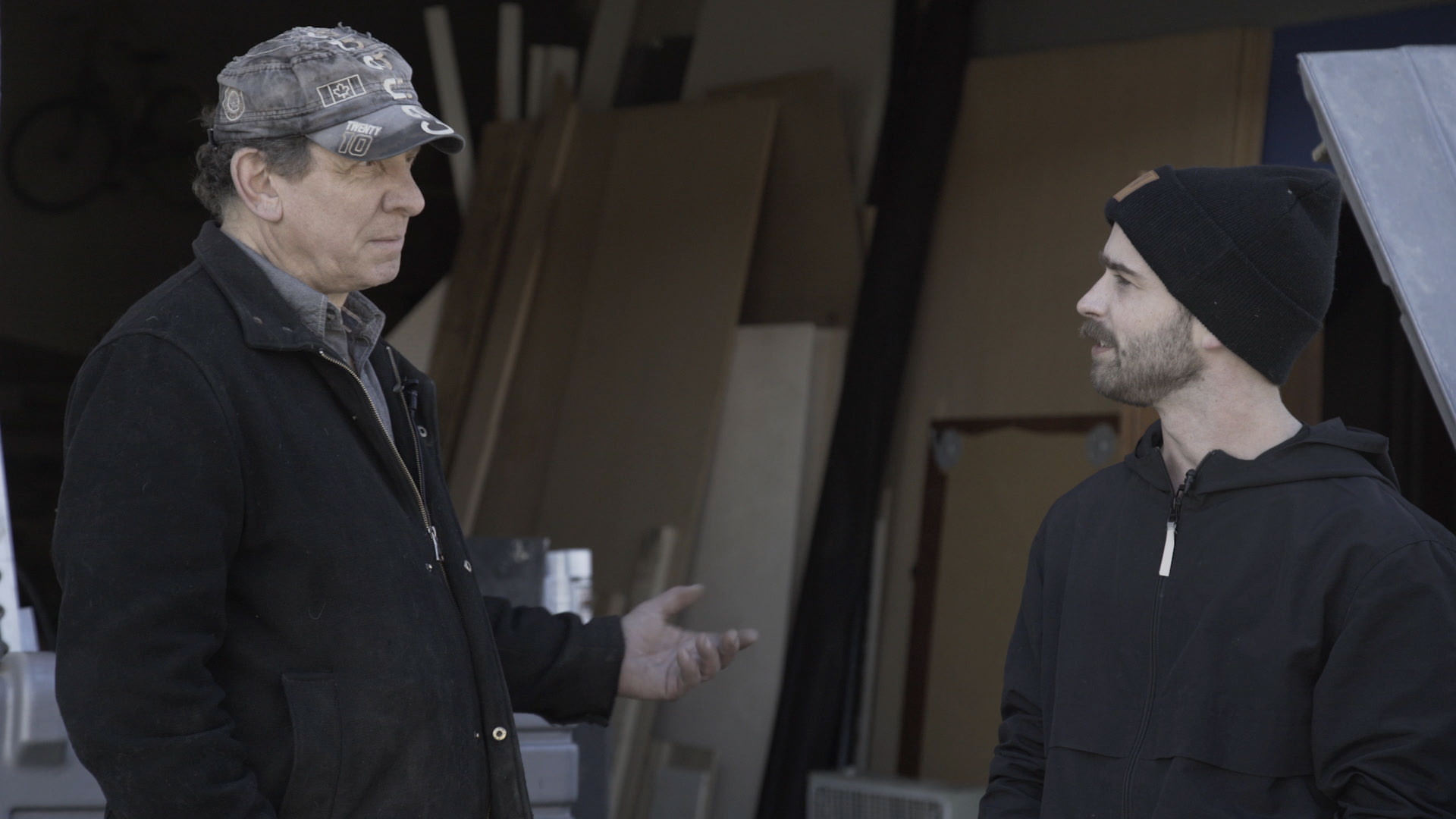 Take out of the Driver’s Seat of the Car

In order to make room for the equipment we were going to hold the motors with, we had to take out the drivers seat of the car. The bolts holding the seat in were rusted in, so I had to use an angle grinder to get the seat out. I felt like a total badass.

After taking the seat out, we did some measurements and spent a good portion of the afternoon putting together this bracket. This guy was going to be holding the motor controlling the steering for the car, and the linear actuator controlling the brakes. Welding skills are required for this, and so I had to try and pick them up fairly quick. At first I was pretty brutal at it, but eventually got the hang of it, to the point that I could weld stuff that could work.

Mount the Steering Wheel Motor to the Frame

Below is the motor we used for the steering wheel. Larry took it out of a used wheelchair he bought at an auction and has used it for a bunch of projects since. If you look closely at the gears on the motor, that is a potentiometer connected to the HUB which was used to make sure that the steering wheel would go back to centre after you took your finger off the remote control. If that wasn’t there, you’d have to manually straighten out the wheels every time you turned them, which would make driving straight pretty much impossible.

Mounting this motor was probably the most straight forward thing we had to do for this project. But as you will see later, almost everything else seemed easy at first, but grew into a mountain of problems we had to trouble shoot to get this thing working.

Get the Brakes Working 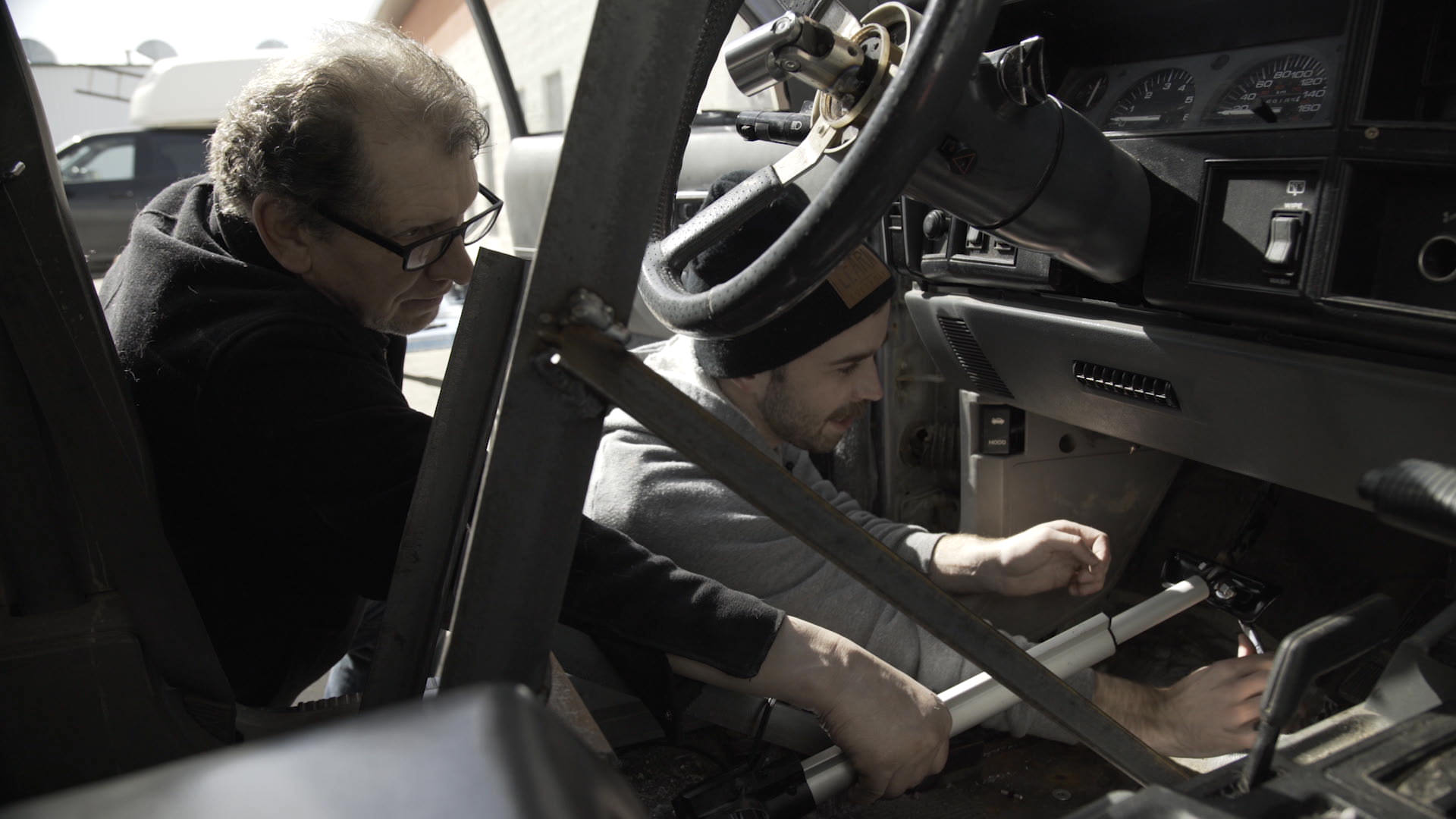 This was the plan, but it ended up not working in reality, and we had to spend many hours jerry rigging this contraption for it to consistently apply the pressure we needed to get the breaks working safely.

Mount the Motor Controlling the Throttle

The next motor to mount, was the servo controlling the throttle. Thankfully, the throttle can be controlled from a wire under the hood, rather than pressing on the gas, so we all we needed was a fairly powerful servo to get this thing working. The biggest challenge with this step, was mounting the servo. We ended up finding a spot close to the throttle, and created a custom mount to put it in and it seemed to work well. 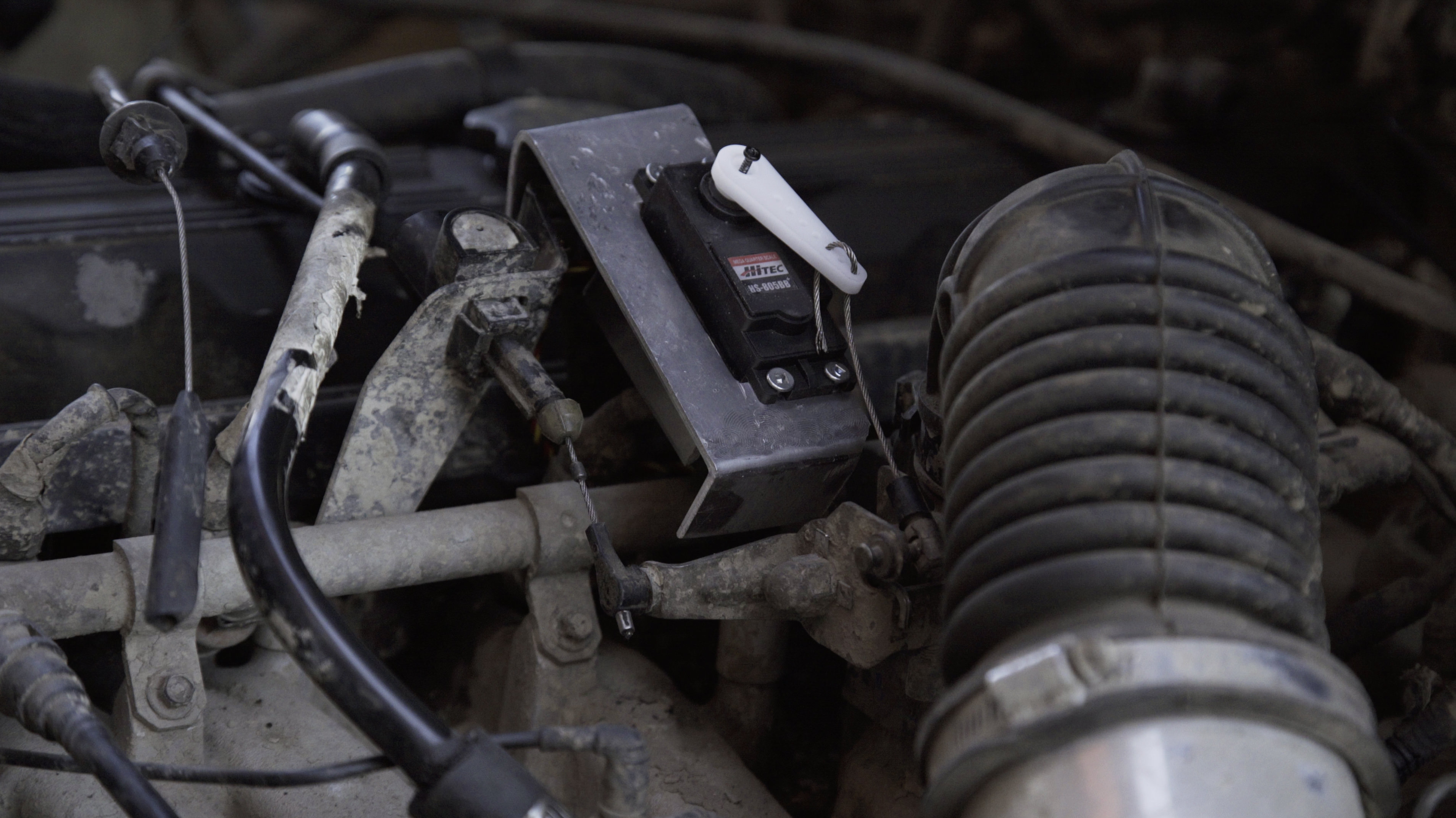 The first time seeing this work was super exciting.

Find a Motor Driver, and Program the Motors

Now that had all the motors in place, we had to figure out a way to control them. Larry had a motor controller that he’s used for a variety of different projects that he was willing to risk for this project (LARRY! AMAZING!). This controller would be used to send the information it receives from the remote control, and send it to the motors. 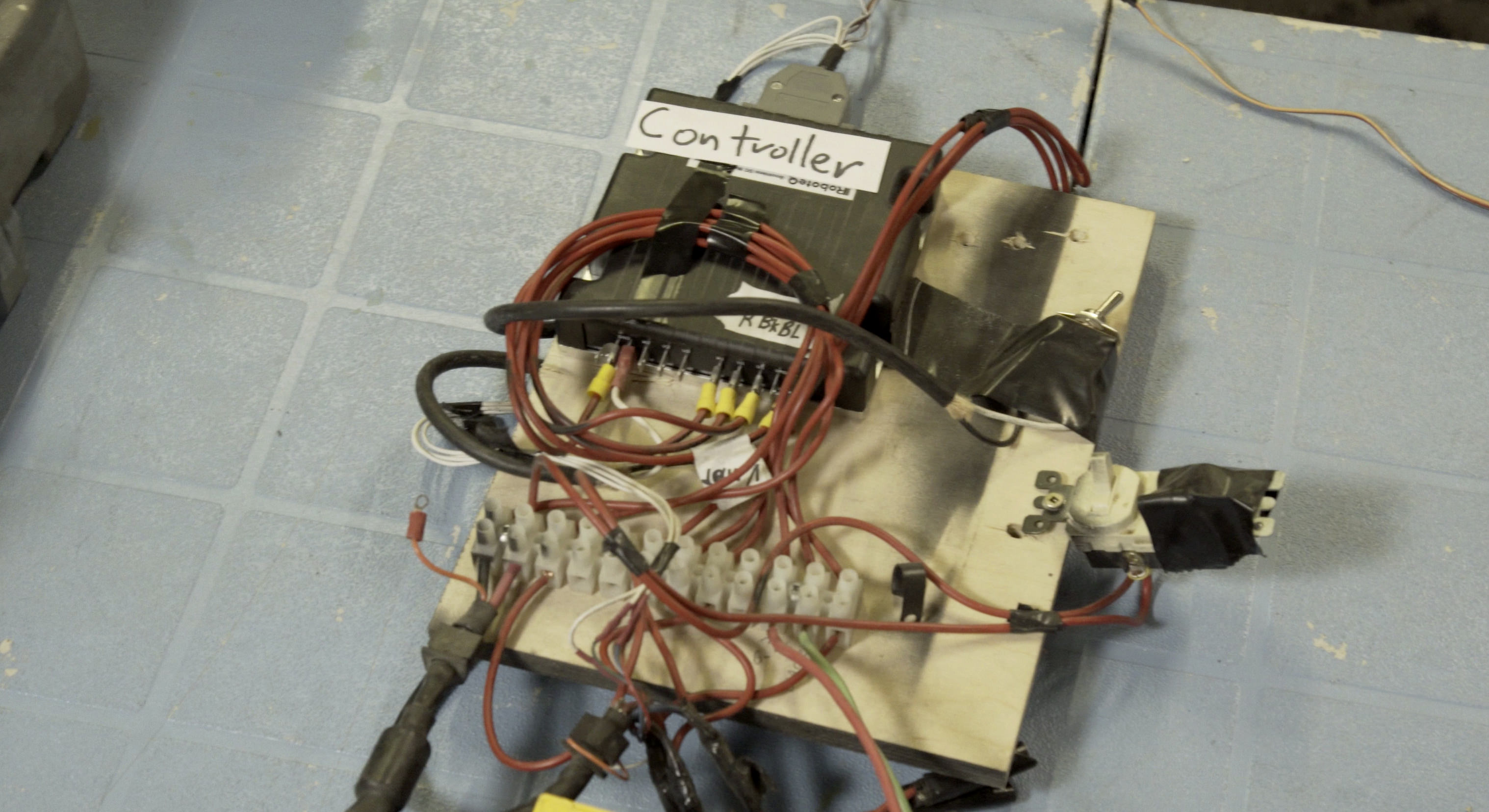 We also set up a kill switch on a separate remote in case anything went wrong, or the car started to go out of control. I think this is a SUPER important step that people on Youtube videos rarely mention. As you’ll see further down, we had some problems with the first shoot day, which made having a kill switch vital to our crew’s safety, and pulling this off. 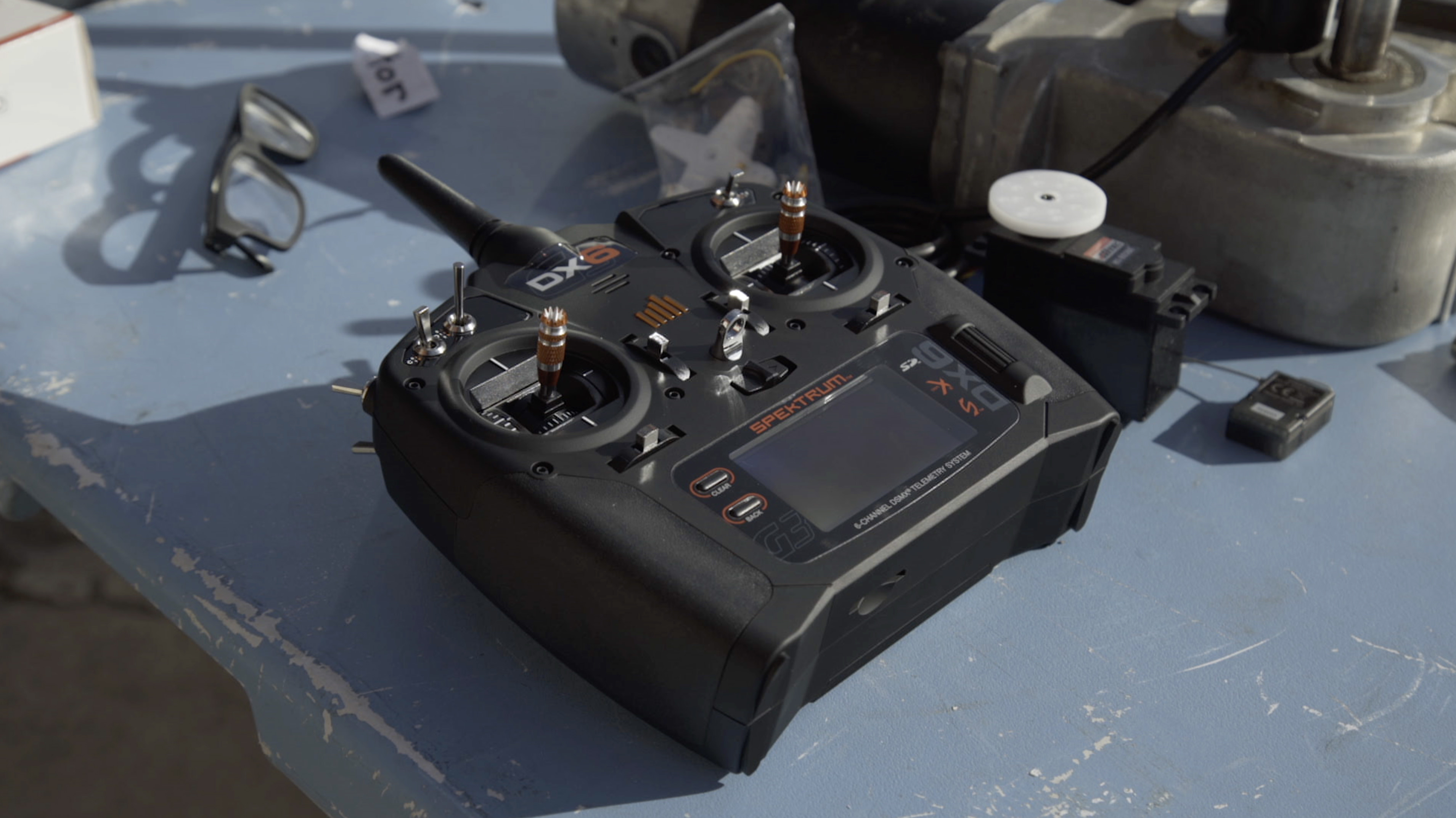 The first time driving this thing off the ramp was an incredible feeling. It was a mix of relief, awe and tenny tiny bit of fear, especially when it was pointing at you.

Unfortunately, that feeling only lasted a few minutes, because the servo controlling the throttle started to malfunction due to interference from the engine. It would accelerate out of control, until we hit the kill switch (good thing we had the switch!).

Larry’s solution was to put the servo inside the cab and run a wire under the hood connected to the throttle. It took a a few hours of fiddling around, bunch we were eventually able to make it work. We tested it later that day, and as far as we could tell this was the last problem that we had to trouble shoot to get the Jeep ready for the shoot.

After figuring out the servo problem, the jeep was finally a fully function remote control car. Sixty man hours, a few thousand dollars and a failed jump attempt later, we were finally able to take this guy for a spin. It was an absolute blast, and totally worth the effort and $ we put into it.

My main suggestion if you try and build this, is to make sure you include a kill switch that can kill the engine if it goes out of control. If we didn’t have that, the first time we fire the car up it would’ve driven into a fence, destroying the car and potentially harming someone. So do that haha.

Anyways, thanks for reading and keep your eye’s peeled for next weeks episode coming at ya soon!