Cost: However friggin much money you have

60MPH, 2 Inches off the Ground

First off, the fact that we still use imperial to measure speed and distances is ridiculous. I LIVE IN CANADA GOD DAMMIT, WE USE THE METRIC SYSTEM HERE. JUST LIKE THE REST OF THE WORLD.

Much Better. Also, before we get started I would like to provide you, the wonderful and ever wiser individual whose is currently reading this post (who looks much more handsome than usual btw, did you get a haircut?), with the opportunity to listen to one of the greatest (and potentially only) songs ever made about Go-Karting. Let the harmonies and genius lyricism sweep you up, and take you to a better place. A place with rubber scared pavement, Go-Karts comparing battle wounds and middle aged dudes with lots and lots of money. 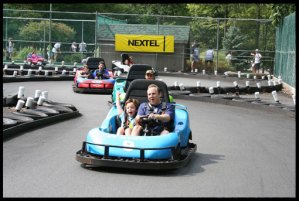 And though it’s difficult to argue that that isn’t a good time, it is not even close to what the fine folks at EDKRA are used to. For some comparison, The cart I drove was one of the slower classes, and would top out at 100km/hr on the straight away. And when you’re that close to the ground, it feels like 300km/hr. Some of the faster carts at the track could go from 0-100km/hr in under 3 seconds. These karts in short, compact distances are quicker than most super cars.

So Why Is Karting Even Such a Big Deal?

BECAUSE! THATS WHY! That, and the fact that karting has been the “humble” starting point of some of the greatest drivers in history.Ayrton Senna, Michael Schumacher, Alain Prost, Fernando Alonso, Kimi Räikkönen, Jenson Button, Lewis Hamilton and Sebastian Vettel all got their start in those tiny four-wheeled cages of death, and then eventually moved onto larger four-wheeled cages of death.

Even if you don’t know any of those drivers in that article, just knowing that they started in karting, and became absolute legends in the racing world later on in their lives is pretty amazing. It would be like Usain Bolt learning how to run without shoes, and eventually buying a pair of Nikes to use in the Olympics. Except for the millions of dollars that it costs to be a professional driver of course…but you get the point.

How to be quick in a Kart

So you actually want to learn what the title says it would teach you hey? FINE. Here is a list of the “How to be Quick” tips I got from the professional and semi-pro drivers I talked to during my two day karting experience.

And now you’re ready to be the next Niki Lauda, Ayrton Senna, or Ricky Bobby! Hooray!

What Did I Learn?

I learned that spinning out in a go kart, going between 60-80km/hr, and having 10 other go karts flying towards you is freakin terrifying. I also learned that I need much more money, because that was super fun, and I need to do that in the future.
Anyways, thanks for reading, I hope you enjoyed and happy learning!

2 thoughts on “#43) How to Professionaly Race Go Karts”